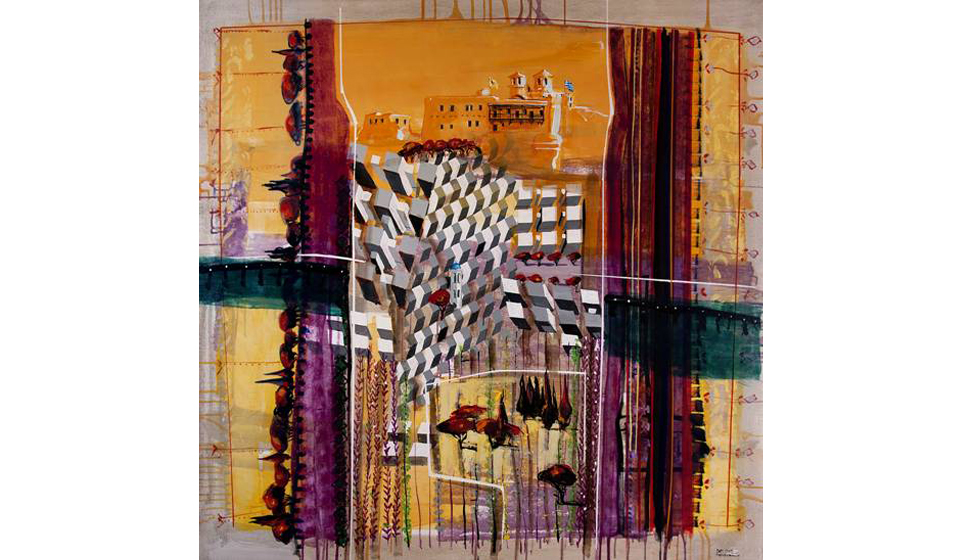 “Besides the experiences and memories one acquires from a certain place, there are also the after-sensations which emerge in time, as they are produced from a combination of impressions and observations, associations and correlations which concern the various ways in which the subconscious functions and processes information.

The place Vassilis Karakatsanis has chosen to define geographically and then elevate to another sphere through his imagination is none other than Skyros.

This Aegean island becomes, for the artist, the thread of Ariadne, allowing him to enter, absorb and artistically reshape elements from the interior of the place and the “self”, since both these parameters here are one and the same. Thus, Skyros’s geographical identity is translated into a correlation between mathematical and physical terms, which essentially demystifies it, transforming it, through these works, into a “geodesy” of sensations, dreamlike states and emanations from memory.

Vassilis Karakatsanis, being always internally consistent with earlier stages of his work, uses, in this group of works, a mixed and very personal morphoplastic vocabulary, which includes, besides his own established style, transformed elements of neo-fauvism, gestural lyrical abstraction, the dynamic gesture of expressionism and neo-pop culture.

Having chosen the method of hiking (whether real or imaginary) in order to make the island his own and then render it through the eyes of his mind and his heart, as well as through the memories that accumulated meanwhile, the painter, showing great inspiration, works with certain recognizable motifs, such as the typical rural shoes called “trochadia”, which are reminiscent of ancient Greek sandals. The “trochadia” also act as markers for measures, sizes and distances in the familiar yet eternally novel world of the island. Other reference motifs include the colors and shapes of Skyrian ceramics, and the roofs of houses with their grey, white and dark charcoal colors, which, through the artist’s psycho-emotional filters, emerge as paradoxical, rhythmical chessboards.

By transforming these years-long experiences and accumulated memories of his, Vassilis Karakatsanis creates works with vibrations, harmonious counterpoints, dynamic gestures and tensions, poetically adding his elegies and his longing for a dreamlike, and at the same time real, place, which will take him on a journey, as he himself, as a super-consciousness, is transformed in the here and there of utopia, always through the varied and multifaceted aspects of viewing, which also include its transcending.”